Ariana James is a bikini and fitness model who’s risen to prominence with her awesome pictures and videos on the web. She was born in Venezuela, but later moved to Colombia to start her career as a model.

Ariana spent some time pursuing modeling, but eventually, she had to leave it to focus on her college studies. However, this period didn’t last long, as Ariana came back to modeling; realizing her passion was too strong to let the opportunity of becoming a model pass by.

After years of trying to make a name for herself, as well as battling with a hypothyroidism condition. Ariana started seeing the fruits of her labor – she became a full-time fitness model.

In 2013, Ariana pushed her career even further to become an online fitness sensation; showing people how despite obstacles that life presents, it’s still possible to live life to the fullest. 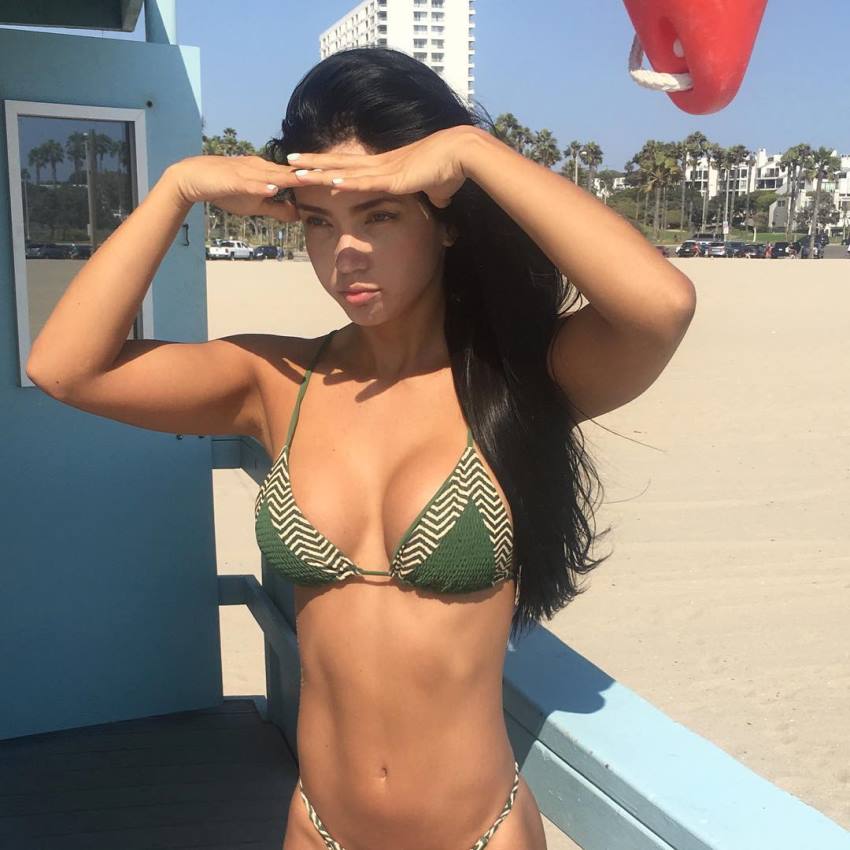 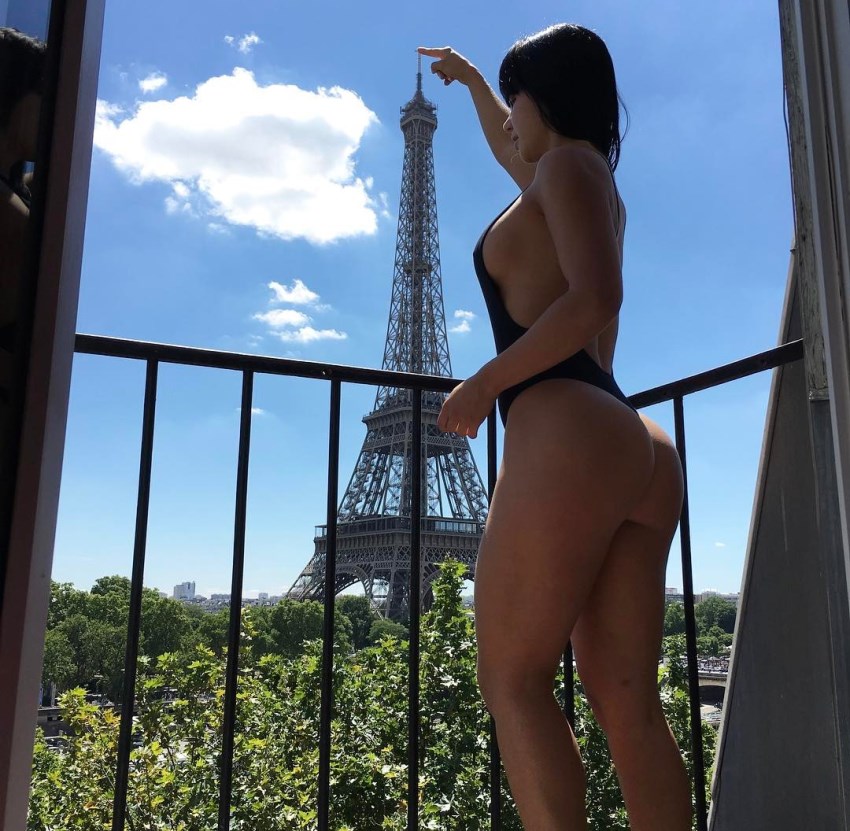 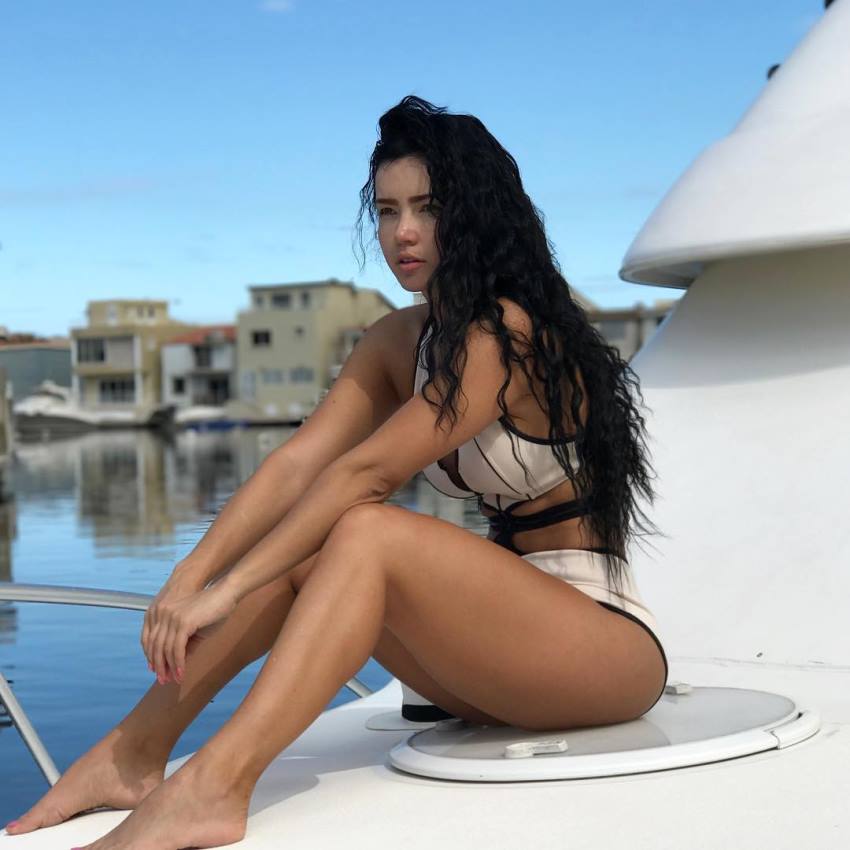 Ariana has a medical condition called hypothyroidism. It makes her body produce much less thyroid hormone than it should. This causes a number of symptoms. Including a poor immune system, weight gain, periods of extreme fatigue, etc.

However, Ariana doesn’t let her condition be an excuse not to work on her goals. She has a strict and consistent discipline in the gym, training up to six times per week, no matter how she feels.

This type of attitude has allowed Ariana to stay in top shape year after year, setting an example for everyone who might be dealing with similar issues as herself.

Although Ariana places the most importance on her diet when it comes to getting lean abs. She also incorporates several ab exercises in her routine to make them ‘pop out,’ and become sharper.

Here’s an overview of the workout, with an in-depth explanation of each exercise below; 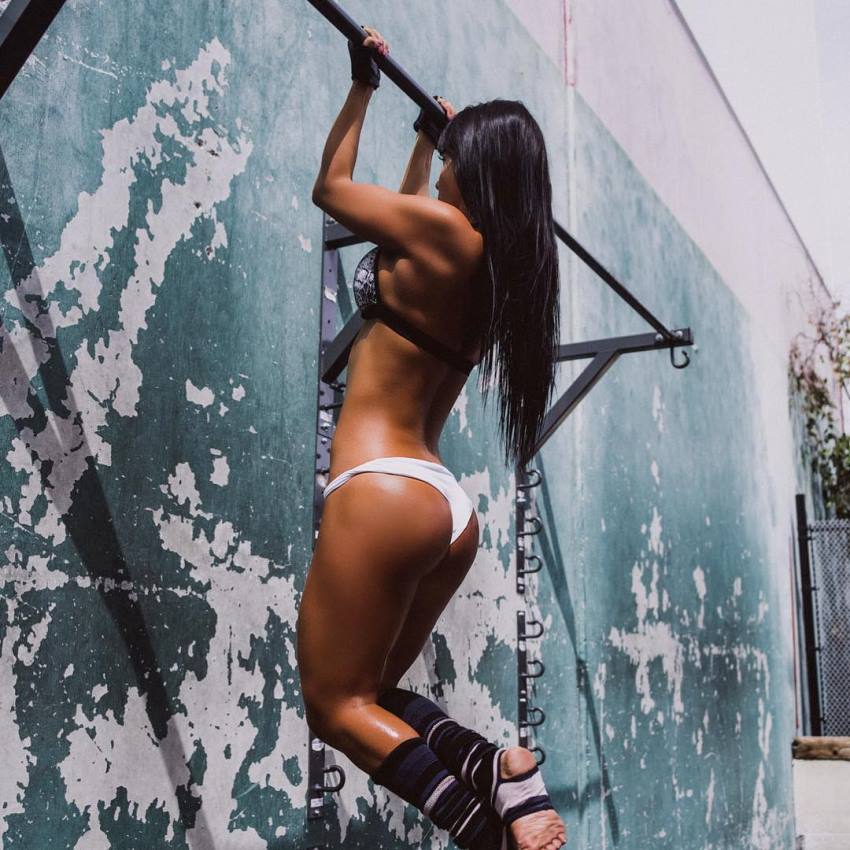 After years of practicing hanging leg raises, this exercise is now the staple of Ariana’s abs workout. When she first began doing this exercise, she did it with her knees bent as it was easier to do.

Now, Ariana can do hanging straight-leg raises with a full range of motion, which allows her to work on her entire core.

If she wants to increase the difficulty of the exercise, Ariana will hold a medicine ball between her knees. This allows her to do the exercise with a lower number of repetitions.

However, no matter which variation of leg raises she does. Ariana always tries to get her legs as high as possible without cheating or using any extra momentum – ensuring a perfect form, and maximum activation of her abdominals.

Kneeling cable crunch is one of the most versatile ab exercises in Ariana’s workout. It allows her to hit her abdominals with different levels of resistance, as well as from different angles.

With that in mind, Ariana ensures that her hip flexors are tight and aren’t doing much of the work. Also, she makes sure that her back is rounded, as keeping it flat limits the degree to which she can target her abs.

Lastly, Ariana keeps her hands in the same position throughout the entire movement, as this prevents her shoulders and upper back from becoming involved. 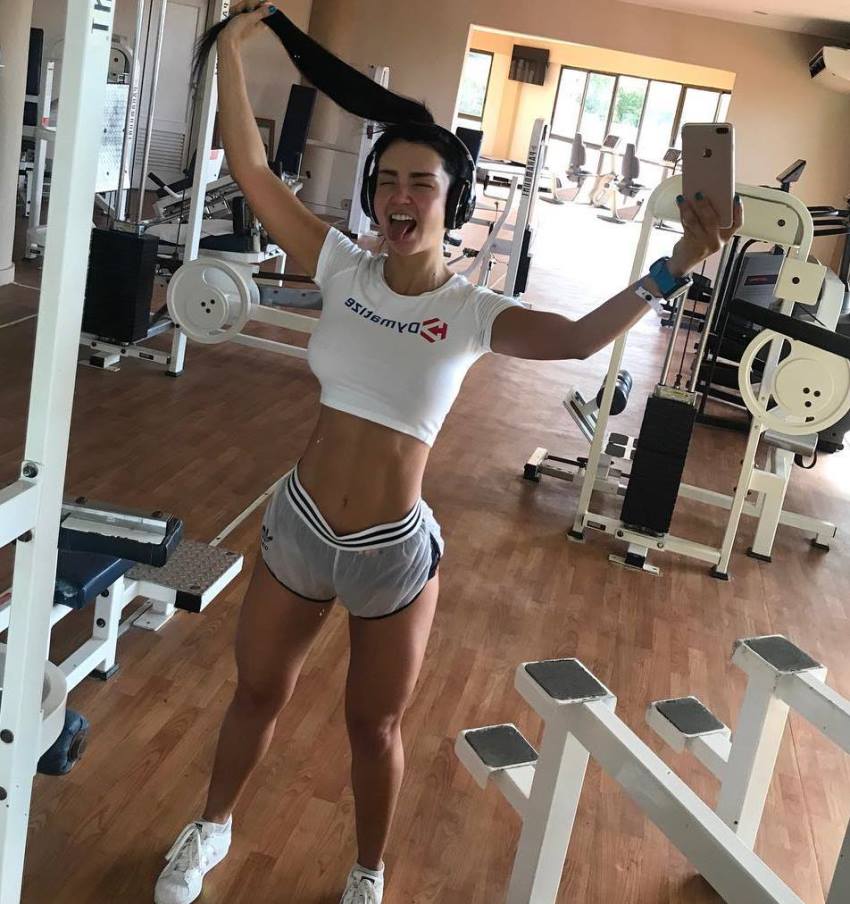 As Ariana also likes to use the ab wheel rollout, her midsection is forced to fully activate to keep her spine neutral. This movement is highly effective for her abs, but it’s also very demanding.

For this reason, Ariana advises beginners to start doing ab wheel rollouts carefully and with reduced distance. Once comfortable, she suggests increasing the distance and difficulty.

Machine crunch works great as either the 1st exercise of Ariana’s workout, or as a finisher – it all depends on how she wants to do it.

For example, if Ariana wants to make her abs more visible and muscular, then she’ll load up the weight and do a low number of reps. This ensures an activation of her fast-twitch muscle fibers, which builds up her abs more than just doing bodyweight movements.

Likewise, if Ariana wants to finish her workout with the most intensity possible. Then, she’ll just drop the weight down, and do a high number of reps. 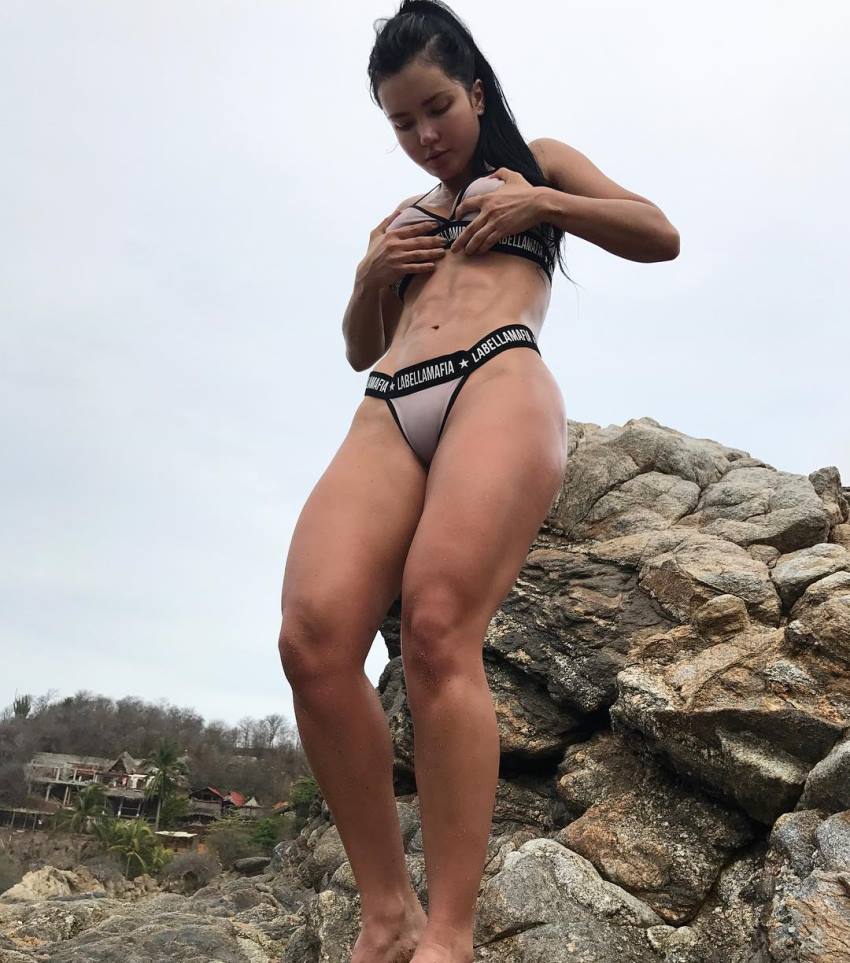 Planks are another effective way for Ariana to finish her abs workouts. It’s a versatile exercise which allows her to adjust the difficulty, as well as the degree at which she wants to hit her abs or obliques.

If Ariana feels a regular plank is too easy for her. She’ll simply lift her leg or arm, or both; thus, increasing the difficulty of the plank.

To take it even further, Ariana will sometimes put her forearms inwards, and places her feet out – making the exercise as difficult as it can get. 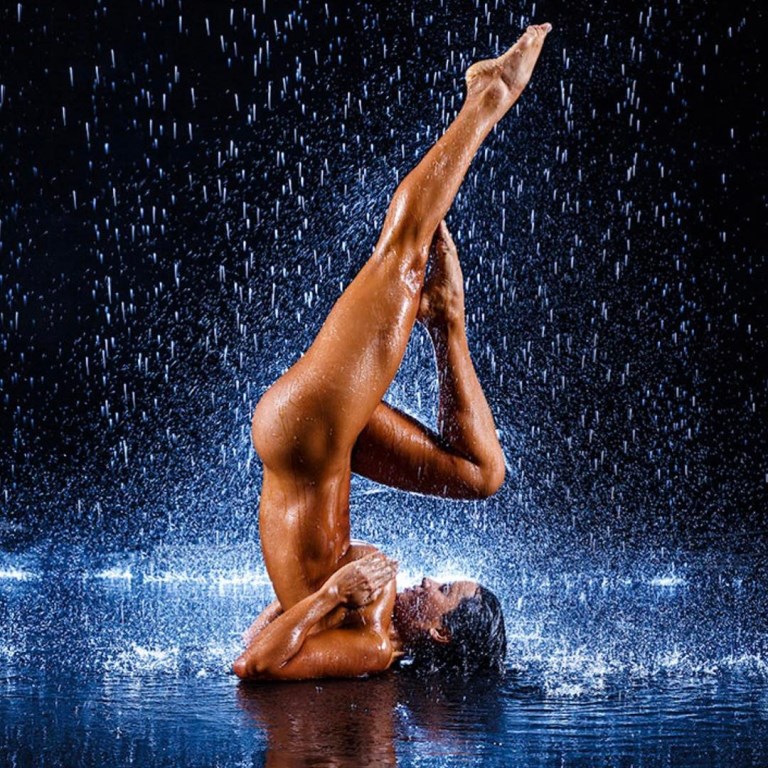 Ariana has to lead a constant battle with her low thyroid hormone levels, which means it’s easy for her to gain weight and lose a lot of energy.

Because of this, Ariana watches her diet carefully, avoiding anything that’s high in saturated fats or simple carbs.

Some of the foods she’ll eat include; 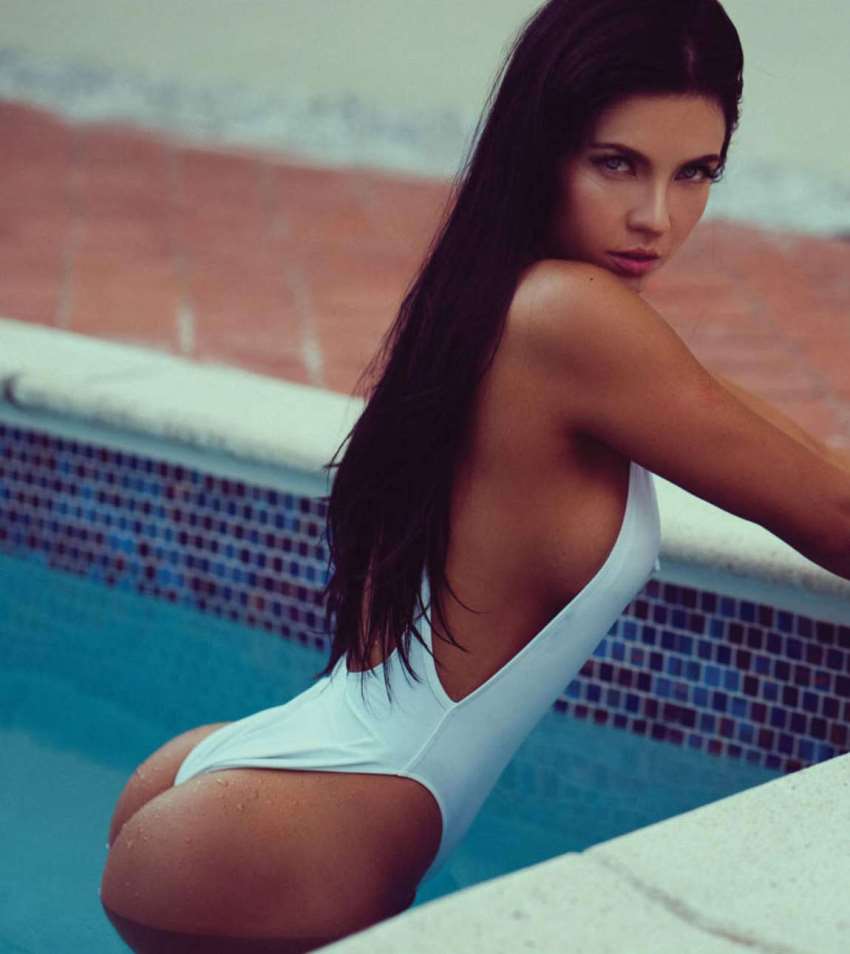 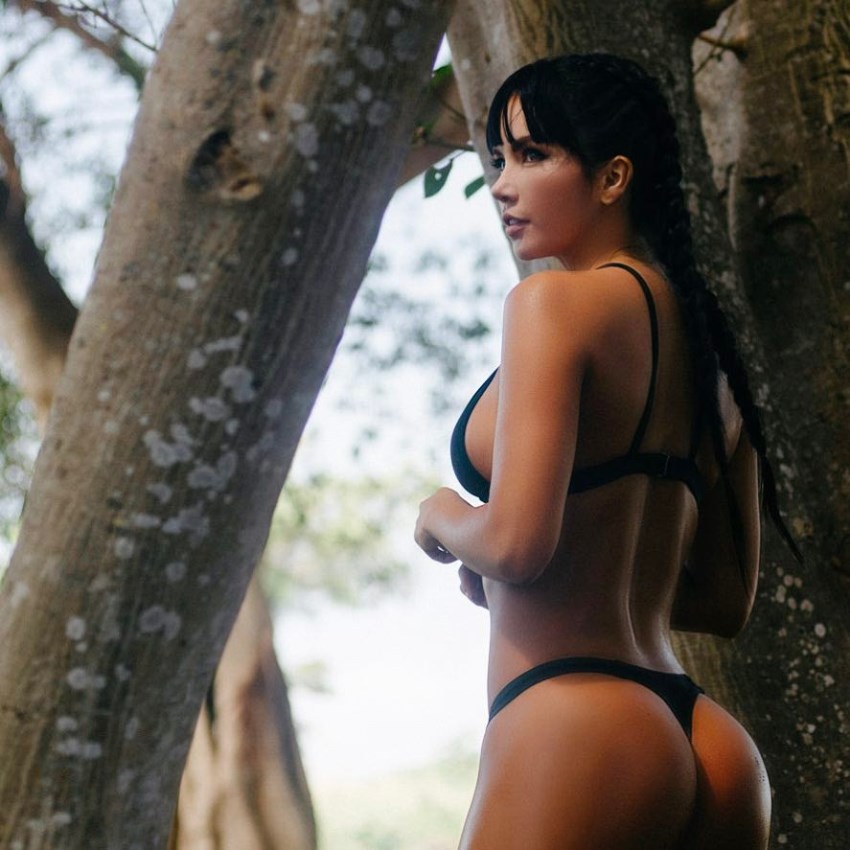 What we can learn from Ariana James

Looking at Ariana James’ diet, it’s clear that it’s not easy for her to keep a fit body all-year-round. Add her low-thyroid hormone problems on top of that, and we can see just how dedicated Ariana is when maintaining her physique.

With that in mind, here’s what we can learn from Ariana James; if you truly want to accomplish something worth fighting for, then you should be ready to face problems along the way.

Some problems will be easy to overcome, and some will possibly be extremely hard. However, no matter what problem is thrown at you, if you can keep a strong mindset, then you can rest assured you’ll accomplish anything your set for yourself.