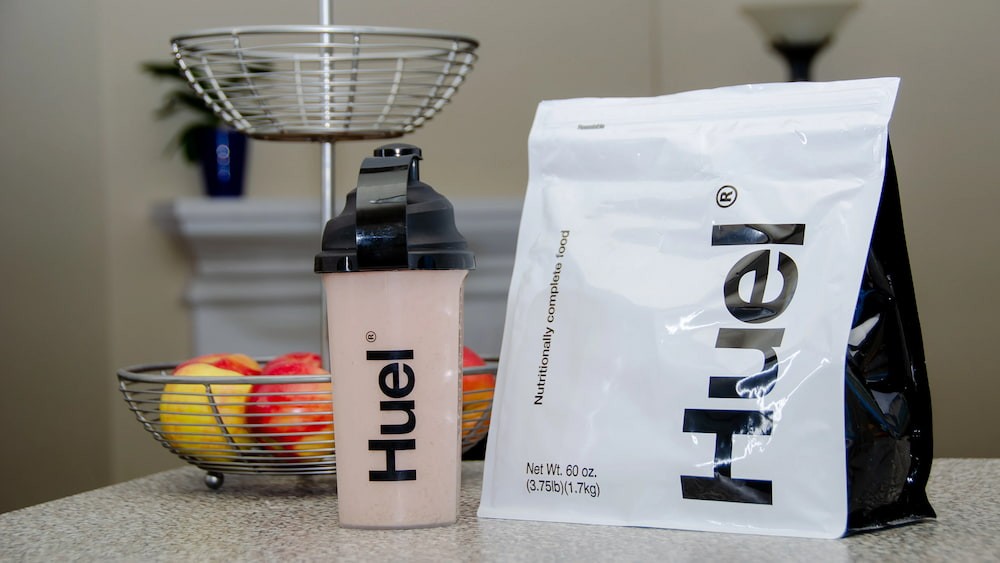 In this article, we will be taking an in-depth at Huel weight loss reviews from customers. If you want to see where Huel ranks on our all-time top five meal replacement shakes, check it out here.

Huel is, alongside Soylent, the most well-known meal replacement shake company. But, unlike Soylent, it isn’t terrible either! But how good is Huel? We have combed through Reddit and Trustpilot to give you a fair representation of what people are saying.

But, let’s face it, Huel is a meal replacement shake. The crown jewel of the Huel operation is their version 3 Huel powder, but they also sell a higher-protein version called Huel Black and hot and savoury instant food options.

There is also a Huel protein shake, protein bars, regular Huel bars, and an instant Huel drink. In this article, we will look at the version 3 Huel powder. It is their most popular product and the lynchpin of their business.

Huel is made from oat flour, pea protein, ground flaxseed, brown rice protein, tapioca flour, natural flavourings, sunflower oil powder, and a micronutrient blend. In addition, they use sucralose as their artificial sweetener.

Ten flavours of Huel are available, with vanilla and banana proving the most popular with customers.

The reviews on Trustpilot are primarily positive, with 81% of customers scoring is excellent and a further 9% scoring is great. There are over 11,000 reviews. Many talk about the use of plant-based protein as a positive, while the customer service and delivery were also praised.

There were quite a few complaints about Huel’s insistence that you have to order a minimum of two bags and that you can’t test the flavours beforehand.

One of Huel’s most significant issues is that many of the flavours they use aren’t very good. For example, banana is listed as their most popular flavour, yet it receives a lot of negative comments.

Providing ten flavours will always lead to some flavours not being as popular as others. But sometimes, having too much choice can cause issues, particularly for new members.

As you can see, there are quite a few complaints about the product tasting “artificial”, possibly due to Sucralose, which is not popular with everyone. But for everyone who dislikes the taste, there is someone who loves it.

According to Trustpilot reviews, Huel is a well-run company. Though there are complaints about deliveries etc., for the most part, people are pleasantly surprised with how the customer service reacts to issues.

Taste is subjective, but there are several complaints about the artificial flavour and some bad flavours. For example, banana and chocolate appear to be disliked by many. Other complaints surround the packaging and the scoop (which makes a lot of mess when used).

Few complaints about the powder itself, and most users are pleased with the protein and fibre content.

Of course, Trustpilot is quite a difficult platform for gauging the reviews of long-term users. Most reviews are posted by people who have only just ordered. As a result, many negative reviews are from people waiting for missing packages that haven’t even tried yet.

To get a better idea of how good or bad Huel is, we need to visit Reddit.

For all its faults, Reddit is a great place to go for reviews of products such as Huel because you get a whole host of opinions. There is also the interaction between users that Trustpilot does not allow.

Somebody can complain about or question something, and another user can answer their question, usually without bias. Of course, it’s not perfect, you still end up with many commenters representing the extreme ends of like and dislike, but it’s as good a system as we can get.

The “same problems” that this Redditor is referring to are digestive issues such as bloating and gas. This is a common issue for new users as they get used to the increased fibre and protein in their diet. It can take quite a bit of getting used to.

The fact that they haven’t noticed any changes in energy is a good thing, as they probably consume fewer calories than they would normally. So a drop in energy would usually be expected.

This review is pretty balanced. They appreciate the convenience and the ability of Huel to help them maintain their weight. But they can’t say that they notice the health benefits. It can be pretty hard to see health benefits, and people often don’t realise they are there until they stop!

The lack of side effects that this Redditor has reported should also be noted, as it can sometimes feel like every Huel user complains about digestive issues. This is not the case; many Huel users have a side-effect-free experience.

Another satisfied customer who also recommends adding fruit to their Huel. We’re not sure how seriously to take the jaw muscle complaint. They are only replacing one meal daily, and as they said, they are vegetarian. So it’s not like they are replacing rare steaks with a shake.

Luckily, if they are losing jaw strength, they can make adjustments to their diet, adding more fibrous and chewy foods to their breakfast and dinner.

This Huel customer uses it twice daily and has become very creative when mixing their shakes—adding nut butter, flavour boosts, protein powder, fruits, and experimenting with alternatives to water (presumably milk or non-dairy alternatives). This is an excellent way to prevent boredom and can also help if you accidentally order a flavour that you don’t like.

Some Redditors have mentioned that using Huel has saved them money, while others say it is too expensive. This depends on what their pre-Huel diet looked like. Those who work in offices or aren’t fans of cooking appear to save a lot of money. Whereas those with the time and ability to cook found that using Huel costs more than usual.

Of course, using Huel 2-3 times per day rather than one changes matters. It will undoubtedly end up costing more than if you had bought your food from a supermarket.

But the amount of time saved and its convenience will appeal to many, particularly those in high-powered jobs, where money is less of an issue and time is precious.

This user’s experience seems more balanced. For example, eating a healthy and low-cost breakfast and having their Huel shake for lunch. 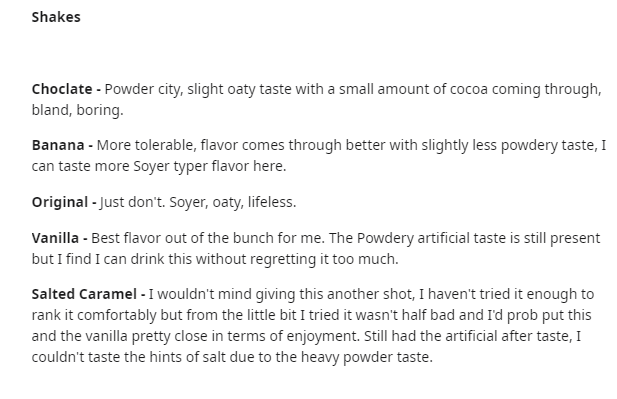 One Redditor has a decent overview of the most popular flavours. Their overall impression of Huel is that it was perfect until the price increase and that they no longer feel it represents a good product. However, to be fair to Huel, the review had a lot of responses from happy Huel customers, which is why we only included a small part of the review here.

One issue with several Huel customers is the use of artificial sweeteners. The issue is that the only Huel powder that does not contain Sucralose (Huel Black contains stevia, so a different issue) is the unflavoured version.

Of course, this means that customers must find natural sweeteners such as honey and maple syrup, or they could add coconut sugars (which is what Rootana does).

Several Redditors mentioned that Sucralose affected their digestion, and they did not enjoy the taste. This is not the case for everyone, but certainly, something to keep in mind. The Redditor does finish their very long Huel review with this, though:

We thought it would be a good idea to break down a large number of Reddit and Trustpilot reviews into some common themes to give you an idea of how Huel is rated among the thousands of reviews across both platforms.

Taste is one of the most contentious issues, with many in-depth complaints about certain flavours, the use of artificial sweeteners, and the fact that Huel does not offer taster packs for new members. But the vast majority of reviews are positive when it comes to taste.

Many describe an “oaty” taste, which is unsurprising in a product made primarily from oats. There is also a lot of love for the salted caramel and cinnamon flavours, while there is general dissatisfaction with chocolate. Vanilla and banana get mixed reviews, as does coffee.

Interestingly, one complaint that turns up, again and again, is related to the amount of choice, with new users struggling to find the ideal combination of flavours. However, this becomes less of an issue for more experienced Huel users, who enjoy the variety.

One thing that Huel gets right is the protein content of their version 3 powder—containing 30 grams per serving and having an even higher-protein option available (Huel Black). This is a massive advantage for people looking to build or preserve muscle during a diet.

Reddit is filled with comments about digestive issues, particularly when you first start taking Huel. This is primarily down to the high-fibre content; before taking a meal replacement shake, many people have low-fibre diets.

Changing the amount of fibre you consume has many benefits (weight loss, improved immune system, increased satiety, reduced risk of cancer and disease). Still, gastrointestinal distress is a common side effect.

Many reviews, particularly on Trustpilot, were highly complimentary about the Huel customer service department. They talked about how quickly their issues were responded to and the efficiency and effectiveness of the staff.

One issue that was mentioned time and time again on Reddit was the use of artificial sweeteners such as sucralose in Huel. Some people hate the taste or dislike the ingredient’s artificial nature. In addition, some people don’t respond well to it or feel that it affects their digestive system.

One thing that Huel has put quite a lot of effort into is creating a culture among their customers. They have their “Hueligans”, who are encouraged to post regularly on social media, share their results, and encourage others to join them.

This is mostly seen positively, though some Redditors do find it a little embarrassing. But, overall, it is pretty popular and may pay dividends in the future.

Huel’s biggest selling point has always been their cost per serving, which is very reasonable. But recently, their price has been raised, and many Redditors have noticed. This has led to a small number of angry messages and comment threads. But Huel is still good value for money, particularly compared to meal replacement shakes like Ka’Chava.

So, Is Huel Worth Buying?

Huel is an effective option if you are looking to lose weight, though Instant Knockout Complete is a better weight loss option. It contains a lot of fibre, making it highly suitable for a calorie deficit diet. Huel is often marketed as being ideal for weight maintenance, and it can also be helpful for people trying to gain weight healthily.