Is There A Link Between Testosterone and Hair Loss? 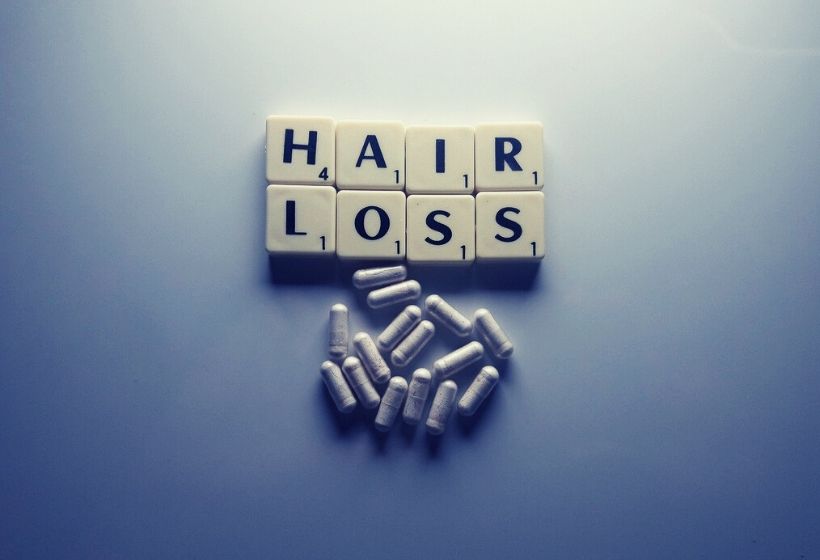 We’ve all heard the rumor about scorching hot testosterone frying your hair follicles. But, is it actually true? Is there a link between testosterone and hair loss?

If you want to find out how your hormones influence your hairline, keep reading. In this article, we’ll uncover the close relationship between testosterone and hair loss.

Surging under your skin are two types of testosterone:

As you can see, not all testosterone is free to roam around your body unhindered.

Some is bound to sex hormone-binding globulin (SHBG) or a blood protein called albumin, making it inactive. It’s also more common for your testosterone to bind to SHBG than albumin.

Free testosterone, on the other hand, is the most bioavailable of the pair. It typically amounts to around two percent of your total testosterone, which is tiny compared to the inactive bound form.

Your body finds using free testosterone extremely easy, because after all, it isn’t bound to any proteins.

You’ll also often find that if you have higher levels of free testosterone, your SHBG count is lower. The same can be said in reverse too.

What is DHT and what does it do?

DHT – aka dihydrotestosterone – is an androgen sex steroid and hormone produced in the gonads. It’s a byproduct of testosterone and a leading cause of hair loss.

So, yes, there is a link between testosterone and baldness – just not as you’d expect.

As an androgen hormone, DHT contributes to some of the typical masculine traits you’d associate with male sexual maturity.

It can also contribute to receding hairlines, hair thinning and male pattern baldness too.

It’s estimated that about 10% of total testosterone in adults is converted to DHT by an enzyme named 5-alpha reductase[1].

Scientists also believe DHT to be 2.5 to 10 times more potent than regular testosterone[2].

At the time of writing it’s estimated that close to 50 million men and 30 million women in the US suffer from the condition[3].

It will come as no surprise that older men seem to be the most at risk.

DHT contributes to baldness by binding to hair follicles and causing them to shrink via a process called miniaturization.

Imagine follicles as tiny capsules in your skin that house a single strand of hair, which will grow for anywhere between two and six years.

Then, at the end of its growth cycle, the strand will fall from the follicle before being replaced by a new one.

Even if you were to completely shave your head, the same strand would continue to grow until its cycle ends.

Smaller follicles have a harder time supporting a healthy strand of hair.

Eventually DHT can cause them to a shrink to a point they can only produce thinner, brittle strands with shorter growth cycles that take longer to come through.

New hair becomes harder to grow, and once it does, strands break and fall out faster.

Think of a handful of men off the top of your head and mentally examine their hairlines and crowns.

You’ll notice there’s subtleties in each one and some seem more susceptible to hair loss than others.

You’ll also find they follow a similar pattern to their dads, brothers, uncles and grandfathers too.

Like many of their other unique physical traits, the way their hair grows is somewhat pre-determined by genetics.

While it’s not an exact science, looking at your own family history can usually give you an indication of what to expect – thanks Pops.

Inside your hair follicles are androgen receptors that DHT seeks out to attach to.

Therefore, depending on your individual receptiveness, you could have a higher or lower chance of developing androgenic alopecia.

If you have a greater degree of androgen receptiveness, DHT will have a higher impact on your hair follicles, causing miniaturization.

But, if you have a gene that isn’t as receptive, you’re more likely to sport a thick head of hair into your later years and not suffer from male pattern baldness early. 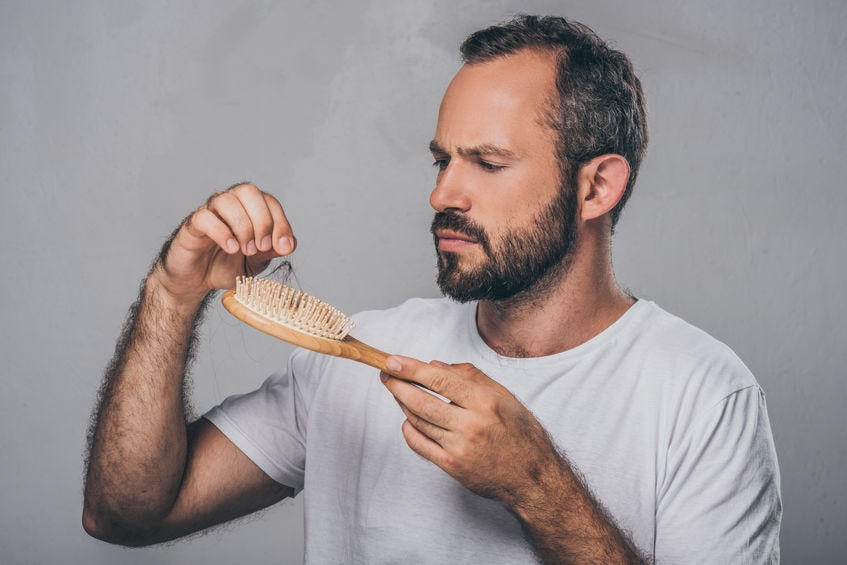 We at Greatest Physiques take great pleasure in debunking myths. For us, there’s nothing more satisfying than bringing you cold, hard facts to keep you in the know.

Here are some of biggest myths surrounding testosterone and hair loss – accompanied by the actual truth.

As a man, you’re always told to skip a generation when trying to forecast your hairline.

ut, given how polygenic hair density is, you’re generally much better off looking at your father first and grandfather’s second.

If both your father and maternal grandfather are bald, there’s a high probability you’ll experience the same changes later in life.

On the flip side, if one is and the other isn’t, you’ll have a medium chance. But let’s not forget that your diet and lifestyle can also contribute to hair loss.

Grandpa might have looked after himself tremendously and managed to sport a strong mane well into his sixties.

Alternatively, you might be more health conscious than your father, so might not experience the same rate of early pattern baldness.

Bottom line – look at all the men in your family and their lifestyles.

It’s been a long-standing myth that bald men have more testosterone.

The thought was that all that masculinity and virility fueled by surging hormones came at the cost of a smooth, follicle-singed head before everybody else.

While it is certainly a great story for the ego, the idea that sky-high T causes your hair to fall out is far from the truth.

As we saw earlier, it’s not how much testosterone you have that determines hair loss – it’s all down to DHT receptiveness.

You could have the highest testosterone count in your whole workplace, while simultaneously possessing the least receptive genes.

Ultimately, it’s the gene that decides, which is why you might still have a full head of hair when your same-age colleague starts thinning.

Interestingly, DHT blockers do seem to work at side-stepping androgenic alopecia, but they can be quite expensive[4].

If you’re concerned about your hair, speak to a professional dermatologist. Addressing the situation early is advised.

Showering with shampoo is making you bald

It’s true – unless you’re sweating it out in the gym, you shouldn’t need to wash your hair every day.

But, not showering because it makes you bald really isn’t a scientifically proven deterrent. It’s just an excuse for bad personal hygiene.

There’s very little evidence that showering and your shampoo will speed up hair loss.

In fact, not shampooing regularly can lead to scalp inflammation and dandruff, making matters worse.

A lot of men seem to think showering and shampoo makes their hair fall out because that’s where they see it happening.

Very rarely do you run your hands through your hair and rub it with a towel, which is where you’ll see the loose hair come away from your head.

This is probably where the myth started, but remember, it is not the cause.

Try to use a high-quality shampoo and conditioner to keep your scalp moisturized.

Men with sensitive skin should also seek out dermatological productions to reduce irritation and inflammation.

We all know a man who refuses to wear a hat in case he ruins his hairline.

You might even know someone who would never dream of putting their long hair into a ponytail.

However, just like the shampooing myths, there isn’t much evidence to back up either case.

If your hat or ponytail isn’t too tight – as in extremely tight and tugging – you’re in the clear.

On the flip side, hair styles like tight braids and weaves can cause excessive tugging on hair follicles.

Rule of thumb – if it’s so tense you can feel your eyes being pulled, it’s too tight. You may start to cause traction alopecia.

Other causes of hair loss 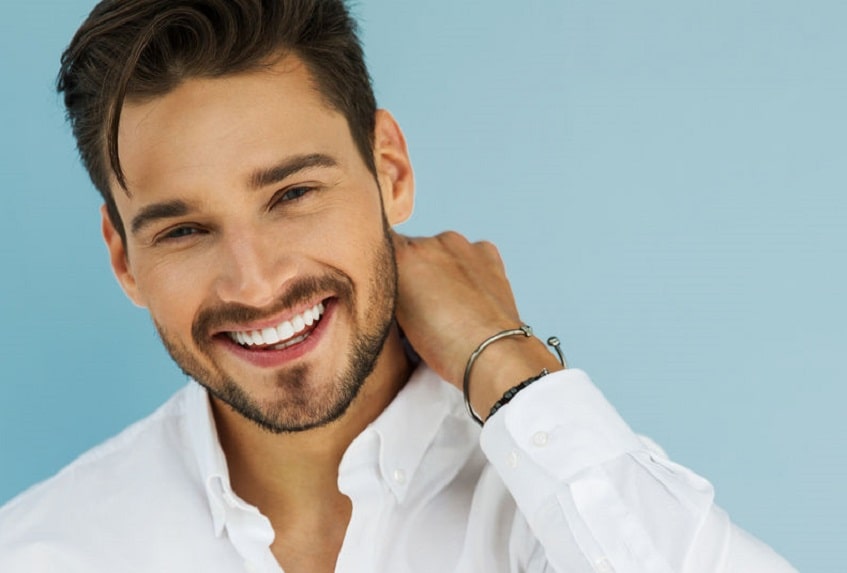 Androgenic alopecia may be a leading cause of hair loss, but it isn’t your follicles only foe. Diet, lifestyle and medical status can all contribute too.

Your hair health, just like the rest of your body, relies on an incoming stream of specific nutrients.

Crash diets or making poor food choices can quickly turn to malnutrition, cutting off your hair follicles from the things it needs to thrive.

One surefire way to sidestep this issue is by sticking to a well-balanced diet full of all the major food groups.

Proteins, fats, iron, biotin, vitamin D, B vitamins and zinc should always be at the front of your mind. Taking supplements could help you conveniently cover all bases.

Putting yourself under considerable stress can also cause unexpected hair loss.

Having major surgery, for example, might make your hair come out in clumps months afterward.

Understandably, you’ll usually start to panic when you spot your locks swimming down the shower drain.

But try not to worry, as this phase rarely lasts. Your hair should grow back when your body recovers from the trauma.

Is there a link between testosterone and hair loss? Given the evidence we’ve seen today, it’d be impossible to deny it.

But saying a receding hairline or bald spot is all down to your T only tells half the story.

The real answer is it depends on how receptive your follicles are to DHT, the potent testosterone derivative.

Sorry, your scorching masculine androgens haven’t fried your follicles away. It wasn’t the hat you wore all through high school either.

Dihydrotestosterone is the cause of any androgenic alopecia. Lifestyle may also play a part in male pattern baldness.

If you’re concerned about your hair loss, visit a reputable dermatologist.

They can offer you professional advice and might be able to recommend the right treatment for you.

You may also need to speak to your health care provider to see if your insurance covers it.

Otherwise, embrace the change. Barbers have been working men’s hair for hundreds of years and know a thing or two about crafty haircuts.

Try something new to compliment your style or simply brave the shave.

There are millions of men facing hair loss every day across the entire globe – you do not have to go it alone.